This is part 1 of a series of posts that involve developing and publishing to Google’s App Engine with Go as the backend. In addition, it will exemplify how to take advantage of the App Engine’s new module system. This post will run through setting up your existing Go environment to develop using Google App Engine.

This post assumes you already have Go setup. Refer to my previous Go post for tips on setting up if you have not. Google Cloud SDK tools have come a long way. Now, there’s a nice website with a script that can setup everything.

Choose Go. source the rc file that you told it to modify or just restart the terminal.

Autocompletion is every developer’s best friend. However, if you open a new Vim-Go and try to add code that uses the App Engine libraries, it won’t auto complete. Vim-Go uses gocode. Just to make sure vim-go has it already you can run within a vim window:

This will update your binaries for vim-go and install them in $HOME/.vim-go/ by default. Gocode maintains this variable called lib-path. This variable points to location of libraries you develop with. The libraries contain the necessary info for auto completion. As per Gocode’s Readme, lib-path defaults $GOPATH/pkg/$GOOS_$GOARCH and $GOROOT/pkg/$GOOS_$GOARCH. This lib-path essentially only points to the created libraries from when you compile you Go code. Gocode uses the resolved value of the environment variable so if for example GOPATH changes, gocode will not use the new GOPATH variable. Luckily, the developers of gocode allow this variable to be overridden via command line. In my previous post, I mentioned using Go Versioning Packager (GVP) to manage your GO environment variables. Now, with the fact that I could possibly switch workspaces and inability to update the location of my libraries for gocde, I began to develop a script to solve just that by essentially looking at the possibly new value of GOPATH and overriding the old lib-path with the new value. More importantly, the script can add additional libraries (like the location of our App Engine libraries). To use the script, you need to:

Note: Make sure the paths for both bullet points contain the absolute resolved path (no environment variables) Run the script and you should be set. So now whenever you gvp into a different workspace, just run this script afterwards for autocompletion. 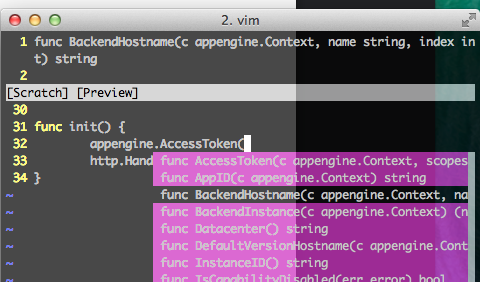 You should be ready to start developing Go for App Engine!

In the next post of the series, I will be doing some simple development and running a server locally on your computer. If you want a sneak peek, you can refer to my Github post here. But warning, while it works now, it’s not polished. YMMV